On April the 17th this year, OMEGA will mark more than 50 years since Apollo 13. When that famous mission lifted off in 1970, nobody on board, nor on the ground, could ever have anticipated the drama and near disaster that lay ahead.

For OMEGA, it a was moment that has lived long in the memory, especially thanks to the Speedmaster Professional chronographs that played a vital role in the crew’s safe return home.

Since 1965, those timepieces had been issued by NASA as a “critical backup” in case the astronauts ever lost the capability of their digital timers.  Indeed, when a major problem did occur for Apollo 13 on their expected journey to the moon, the Speedmaster’s “backup” duties were put into action.

Just two days after launch, an oxygen tank exploded on board Apollo 13, crippling the Service Module and plunging the astronauts into a truly perilous situation. The mission to the moon was abandoned. Now, it was simply about getting the crew home safely.

Part of the innovative rescue strategy, directed from Houston, was to move the astronauts into the Lunar Module. This craft, however, was not built to support so many people for such a long time. Therefore, to conserve energy, the crew shut down nearly all power – rendering their digital timers obsolete and leaving the astronauts at the mercy of dark and freezing conditions.

Apollo 13 faced many serious challenges over the next several days, but it was at the final hurdle, when OMEGA’s essential precision was called for.

Because the mission had drifted off course by roughly 60 to 80 nautical miles, it meant that the module would re-enter Earth’s atmosphere at the wrong angle and bounce back into space with no chance of recovery. Therefore, to manually readjust the course of the craft, an exact 14-second burn of fuel was required.

There was simply no room for error. Without their digital timers, Module Pilot Jack Swigert instead used his OMEGA Speedmaster Professional chronograph to time the burn, while Commander James Lovell guided the craft using the Earth’s horizon as his guide. To huge relief, the unique manoeuvre worked perfectly, and finally, on April 17th, 142 hours and 54 minutes after launch, Apollo 13 splashed down safely in the South Pacific Ocean.

Later that year, on October 5th 1970, OMEGA was presented with NASA’s “Silver Snoopy Award” – as a mark of gratitude for its contributions to the success of human space flight missions. When this prestigious award was first created, Snoopy was chosen as NASA’s unofficial mascot because of his ability to keep things light in serious situations. He also emphasized mission success and acted as a safety “watchdog.”

OMEGA has kept Snoopy and Apollo 13 close to its heart ever since and several “Snoopy” watches have been created to commemorate the mission’s milestone anniversaries. Most recently, this has included the Speedmaster “Silver Snoopy Award” 50th Anniversary timepiece released in 2020. Capturing the light-hearted spirit of the famous beagle, the watch includes a Snoopy medallion on the dial, as well as an exclusive and dynamic caseback that features Snoopy flying in orbit around the moon.

Not only is every Snoopy watch a beautiful and fun tribute to wear on your wrist, it’s also a timeless reminder of the precision and reliability that OMEGA has brought to space exploration for almost 60 years. 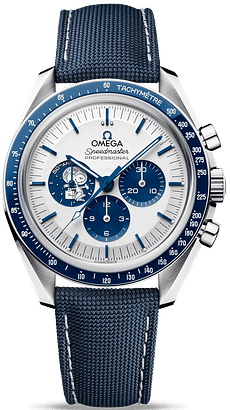